The Rocky Mountain Audio Festival, held every fall in Denver, is a great opportunity to see the upcoming trends in home audio/video, chat with our various vendors about new product, and take in some of that lovely mountain air for a few days. This year, Todd and I once again made the trek to see the Fest and to visit one of Todd’s clients in the area.

The majority of our time at the show was spent talking to our various vendors, who also happened to be manning some of the better sounding rooms in the hotel. We started with Philp O’Hanlon and the Gryphon system he was showing, of particular interest was the new Zena Pre-amp that will be available soon. Philip always plays interesting music, and this time was no different. We sat and listened to a particularly outstanding analog tape of Muddy Waters and it showed off what Gryphon does so well – natural, musical and neutral reproduction of whatever you throw at it. Eventually, you’ll be able to hear a Zena driving our Gryphon Colosseum Stereo amp in our reference room. Philip will bring his sample for an event on November 15. We will get our very own as soon as they start shipping, probably December. 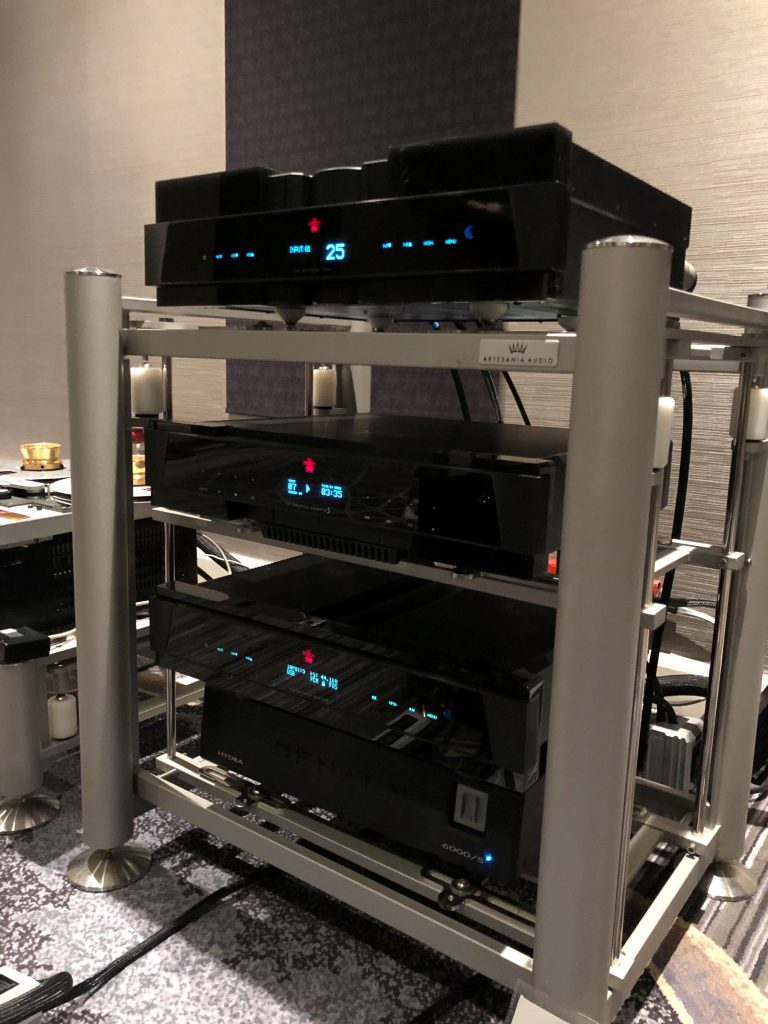 Almost directly below Gryphon (physically speaking) was VTL showing once again with Vandersteen Speakers. We always enjoy hearing what Luke and Bea of VTL have to show. This year they were showing off the newly released VTL TP-2.5i Phono Pre-amp. Since we were listening on a system that was probably pushing $100,000 we just naturally assumed we were listening to the flagship 6.5 Phono Pre-amp. It wasn’t until Bea informed us that what we were hearing was the 2.5i that we really got excited for this product! The 2.5i is a great value at only about 1/3rd the price of the Signature 6.5.

Our next major stop was our friends at Aurender. We always have a lot to ask them, because we absolutely love their products and we get a bit carried away with trying to use them for everything. This year our questions centered on the just released ACS10 (Aurender Content Server). The ACS10 is a CD loader/ripper with excellent metadata acquisition and an internal NAS with two drives. One can be set to mirror the other for back up and are available in three different sizes: enough, more than enough and over the top. The ACS10 also includes a server similar to the N100H and the LAN port is filtered to prevent ethernet noise from sneaking in. The ACS10 can be directly connected to a DAC. It can also be connected to an N10 or W20. Like many Aurender products it reveals much more upon closer inspection. Our demo ACS10 is in our hands now and we are busy digging into all of its features. There is no question that the ACS10 gets the best rip you can get without going to extraordinary, time consuming measures. 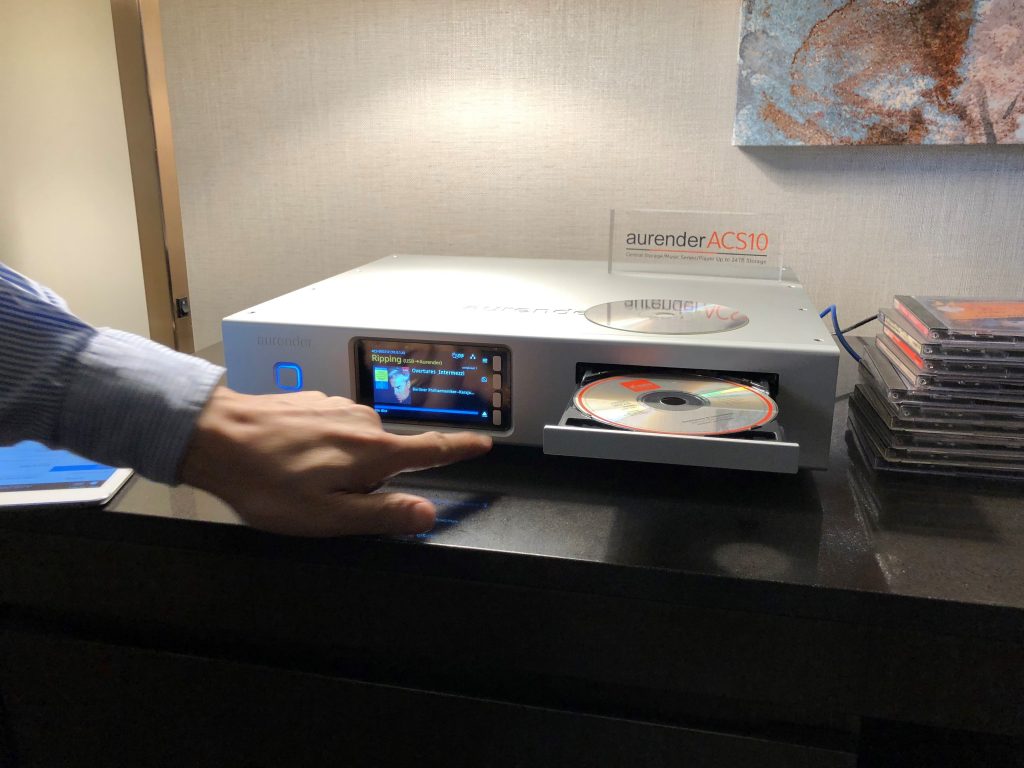 The other curveball that we didn’t know about until this day was there is another new product coming, the A100S or in our words – the Mini A10. The A100S has the same DAC as the A10 (although just a single DAC, not dual-mono like the A10) and only unbalanced outputs. The other thing that differentiates it from all the other products is there is no on-board storage, it is purely a streamer/DAC. We’ll have much more information on both products soon.

Sunday morning we were back at it bright and early trying to cover everything we missed the day before. It started with a demo of the Rockport Cygnus driven by Nagra electronics. This particular room was a good example of the difference setup makes. Nagra was in their normal room at the end of one of the floors in what I presume would be a suite, so they have a bit more room to work with than the normal room. They elected to not treat this room at all and just focused on setting the speakers up well, given the challenges of the room. They succeeded, and it was in large part because someone halfway competent positioned the speakers. Over-and-over again at RMAF (and elsewhere) speakers are just “plopped and pointed” toward the listener. While it’s true that sound will come out of the speakers, if you chose to setup in this manner, it isn’t until they are fully positioned by a seasoned professional that they will make music.

There was more Rockport Technologies at the show this year than in years past, and although some did not sound their best (due to the lack of good setup). The Cygnus in the Nagra room and the Aviors in the CH Precision room were a couple of the best sounding rooms at the show, regardless of price.

Next stop was visiting Will Kline in one of the World of McIntosh rooms and getting to see and hear for the first time the gorgeous limited edition Sonus faber Electa Amator III. We had no idea these were coming, so walking in to the room and seeing not only Will (which means the speakers would be setup well) but some beautiful new Sonus faber bookshelf speakers was the best surprise of the show. The Amators sounded phenomenal, given their modest size, and we’ve all been lusting after them hard. TSE has two pair on order, they are scheduled to arrive sometime in January. They are only building 200 pair and all are pre-sold. Another nice surprise from Sonus faber was getting to see in person the Gravis 6 subwoofers that are set to debut next month as well. These are the “big dog” subs that will round out their newly minted Gravis line of subwoofers. Eventually, all of the subs will be available for audition at TSE.

Over at the Focal room we chatted with another Will, Will Veber, of Audio Plus Services (importer of Focal, Naim and Vicoustic). Focal was getting great sound from a couple of Naim/Kanta systems that they had setup in their “room within a room” space. The new Kanta No. 3 is a monster and is capable of playing huge while still keeping that beautiful top end that we fell in love with on the No. 2. Both of the systems APS had on display took full advantage of Vicoustic room treatment, and it proved how powerful such treatments can be. They were able to take a very large “conference room” type space and turn it into two very good sounding listening rooms through the strategic use of Vicoustic. 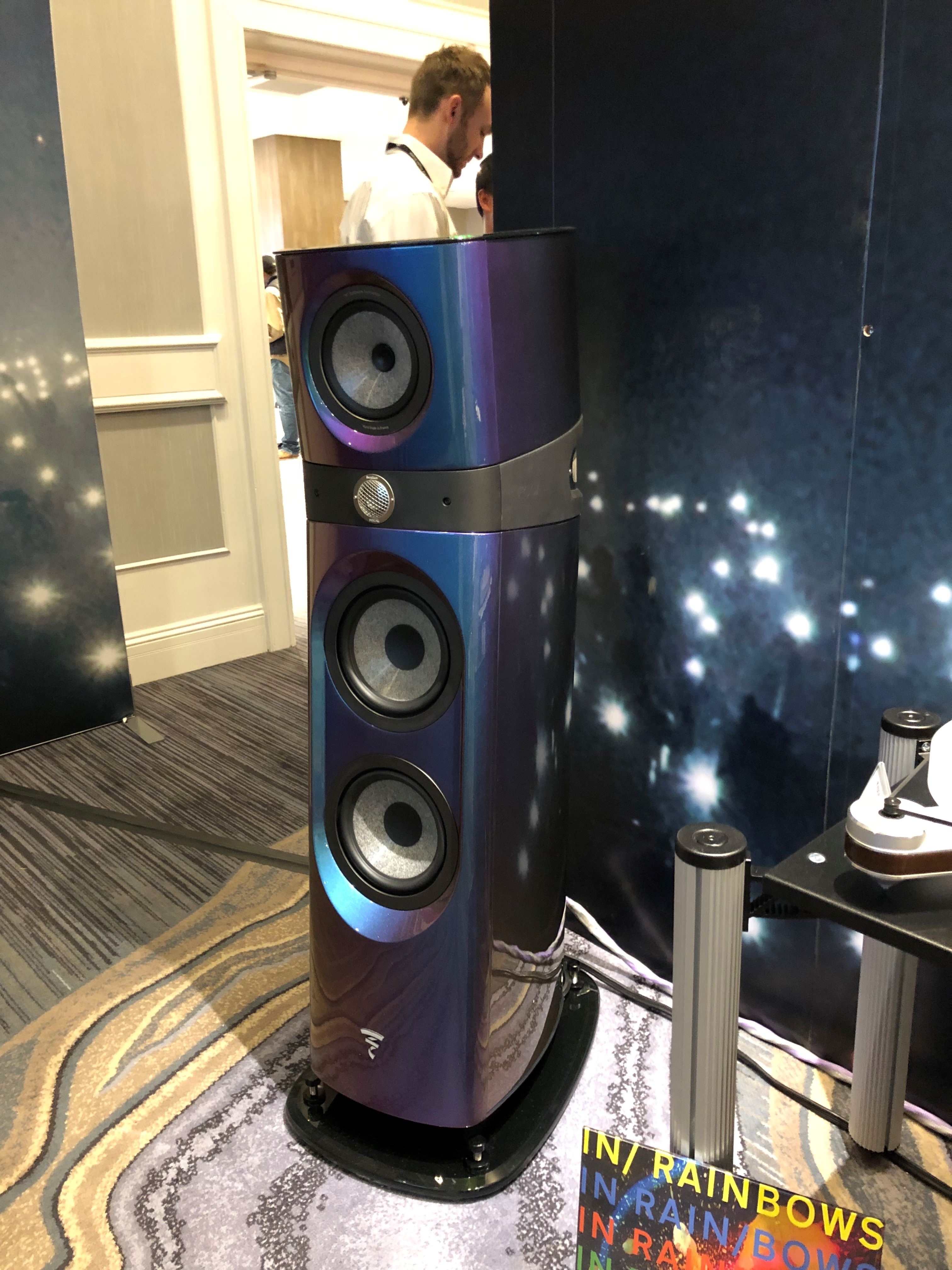 We finished off our time at the show by seeing a couple turntable manufacturers that had been on our hitlist. First up was the TechDAS Air Force V turntable, the most affordable table yet from TechDAS with technology familiar to anyone who has been in our reference room at any point in the last few years. Despite early reports, the V will still have an outboard air-pump that operates the vacuum hold down but unlike the III (and II and I) the motor assembly has been moved into the turntable. The Air Force V was on static display, so we still haven’t heard it but we expect it to hold up to the legacy established by TechDas’ other tables. Last but not least, we talked with Gunther Frohnhöfer of Acoustic Signature and learned that the much beloved Primus is being discontinued because they can’t continue to build them for the price they were charging. If you’ve been on the fence about this table, now is the time! 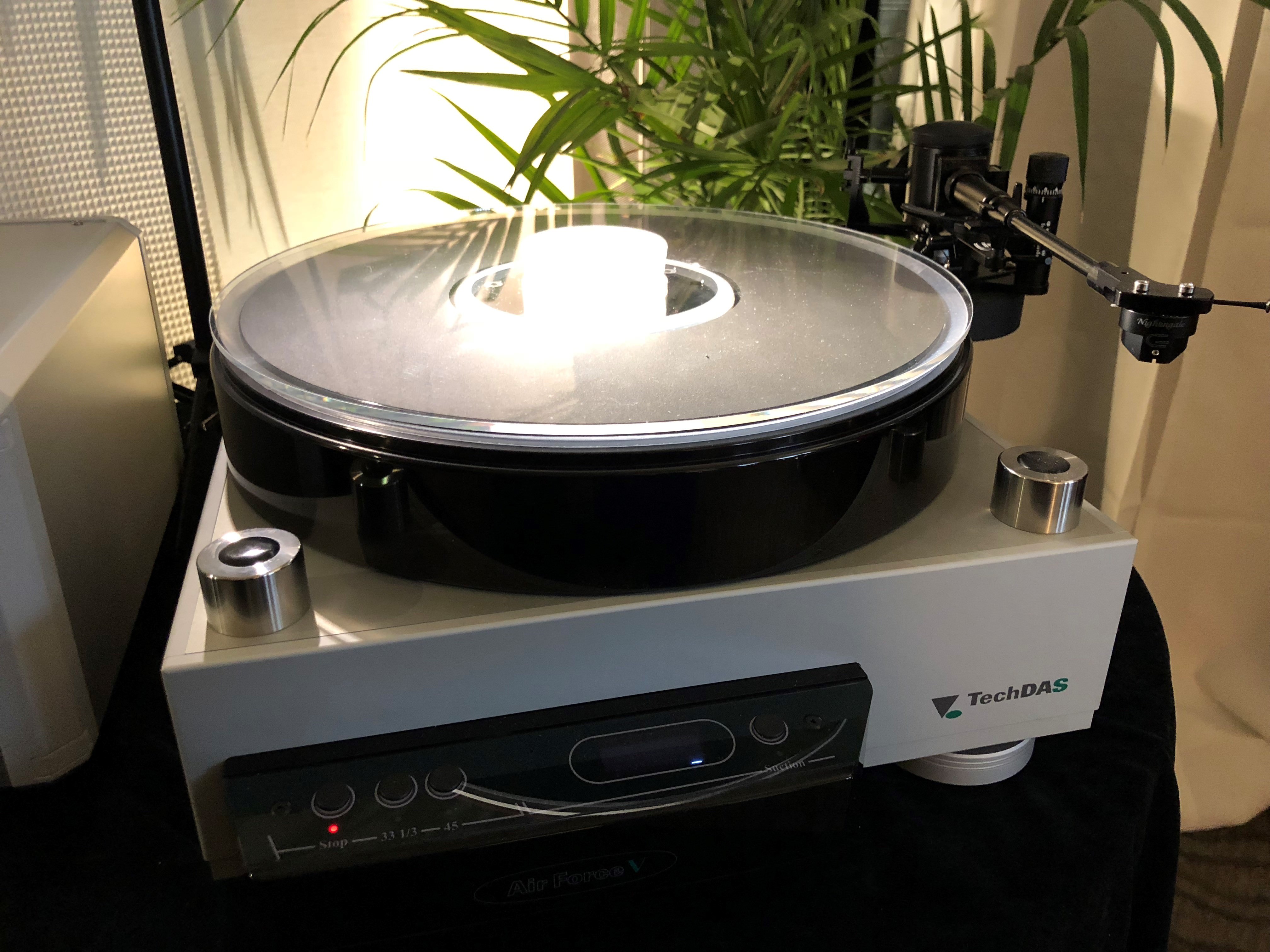 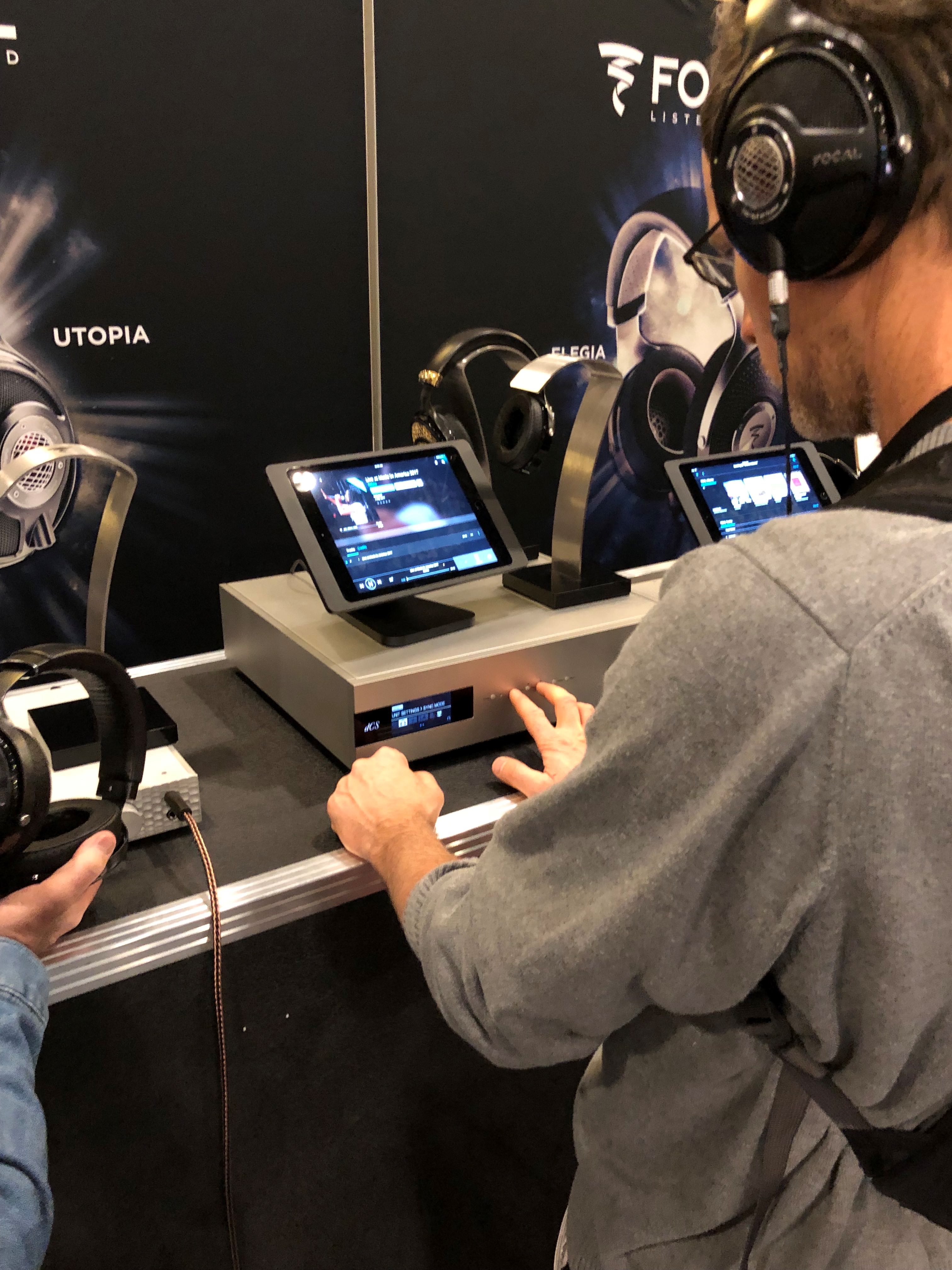 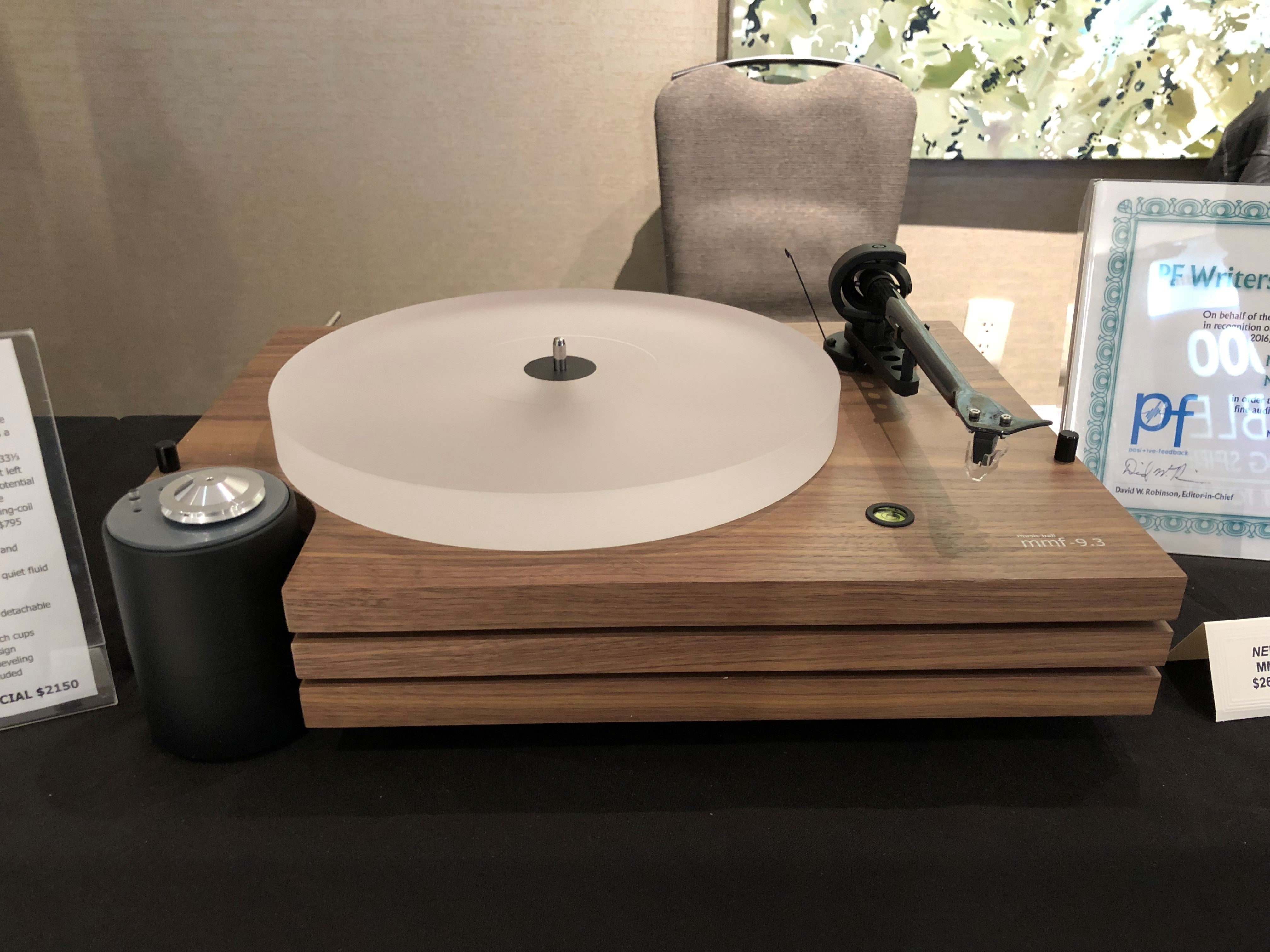 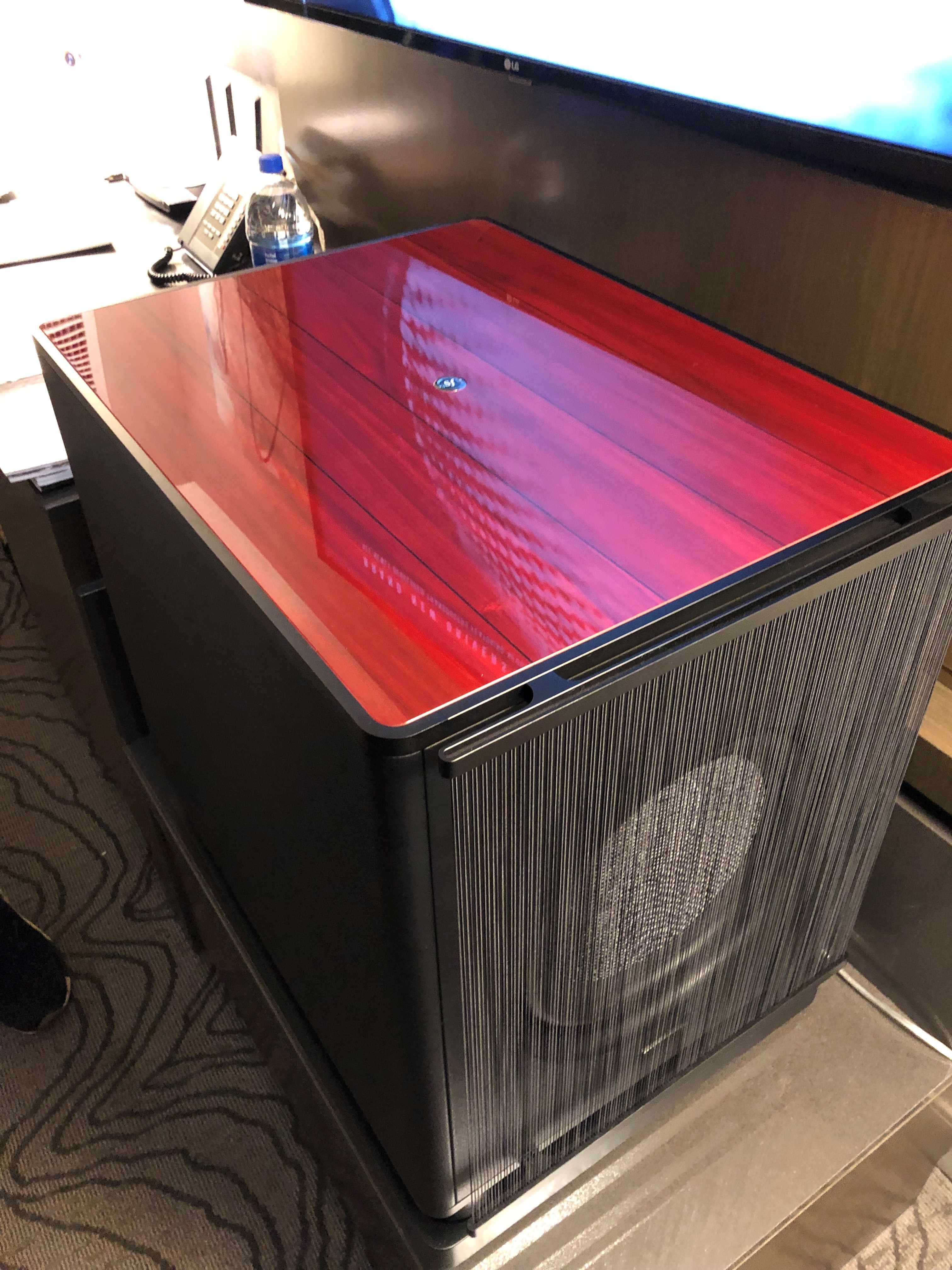 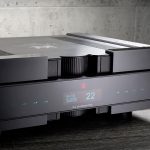