Eric and Zach recently traveled to Kansas City to hear the new Sonus faber Sonetto line of speakers. They have been much anticipated. Sonetto will begin to arrive on our shores in late August. There are eight models. Sonetto represents Sonus faber’s latest thinking in loudspeaker design. Gone is the Venere line – Sonetto fits between Chameleon and Olympica in the Sonus faber line. We were one of only a few dealers invited to the two-day event along with media people. 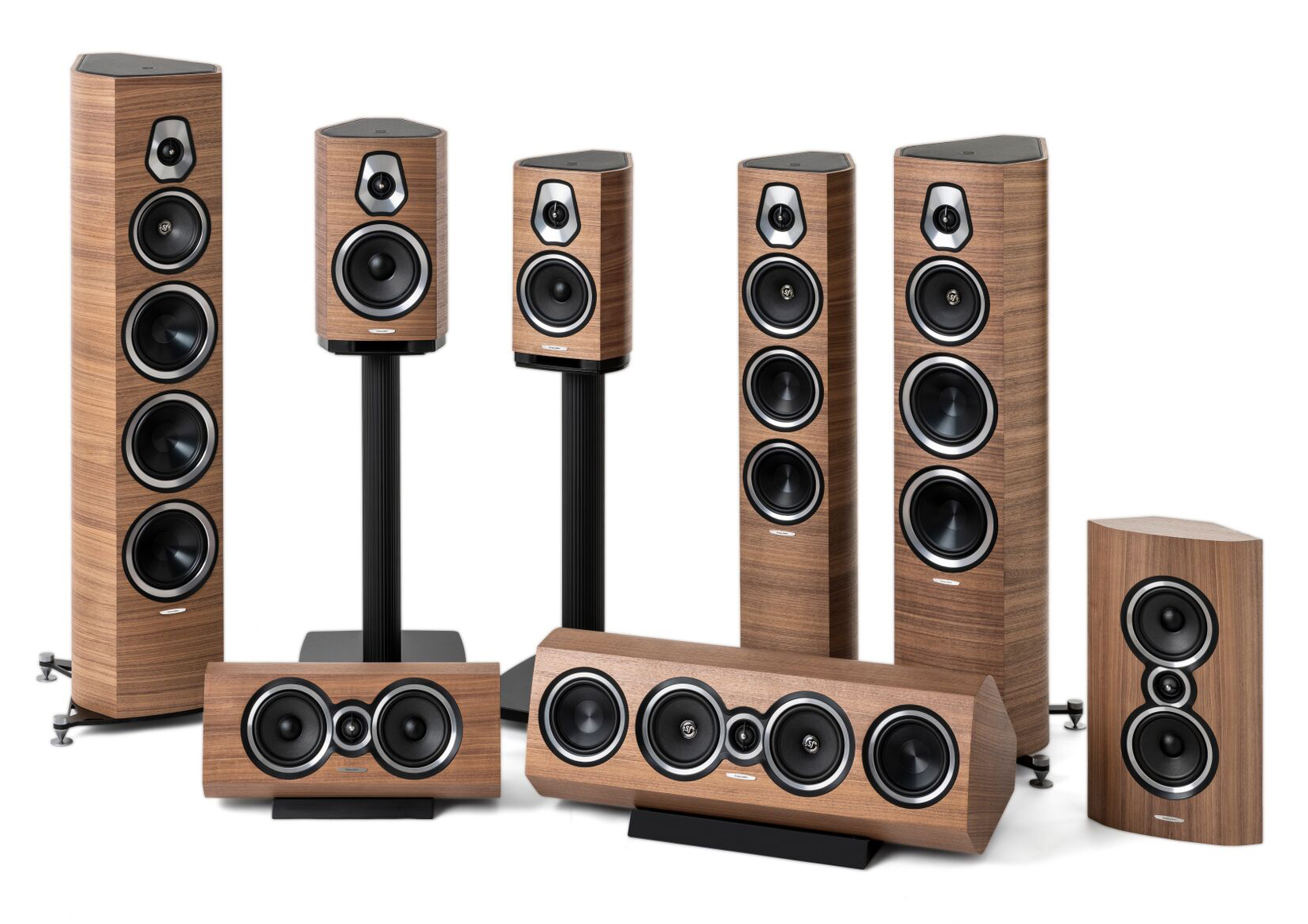 Sonus faber is an Italian speaker maker which started operation in 1983. From the start their speaker designs pay homage to the great, never equaled, string instrument makers of around the year 1700. These families include Stradivarius, Guarneri and others. The Sonus faber approach to speaker cabinet design is like no other maker. It is more in the tradition of the building of a great violin, where the goal is to make it sing.

We were eating a nice catered lunch in the beautiful 1900 Building after having been through the first several hours of Sumiko MASTERS training. In those first few hours Will Kline, North American Brand Manager for Sonus faber, expertly explained the Sumiko process for loudspeaker setup. He spoke at length as to what song he uses, and the five-step process to fine tuning a loudspeaker setup. At this point it was all theory, we had yet to see the method in action. 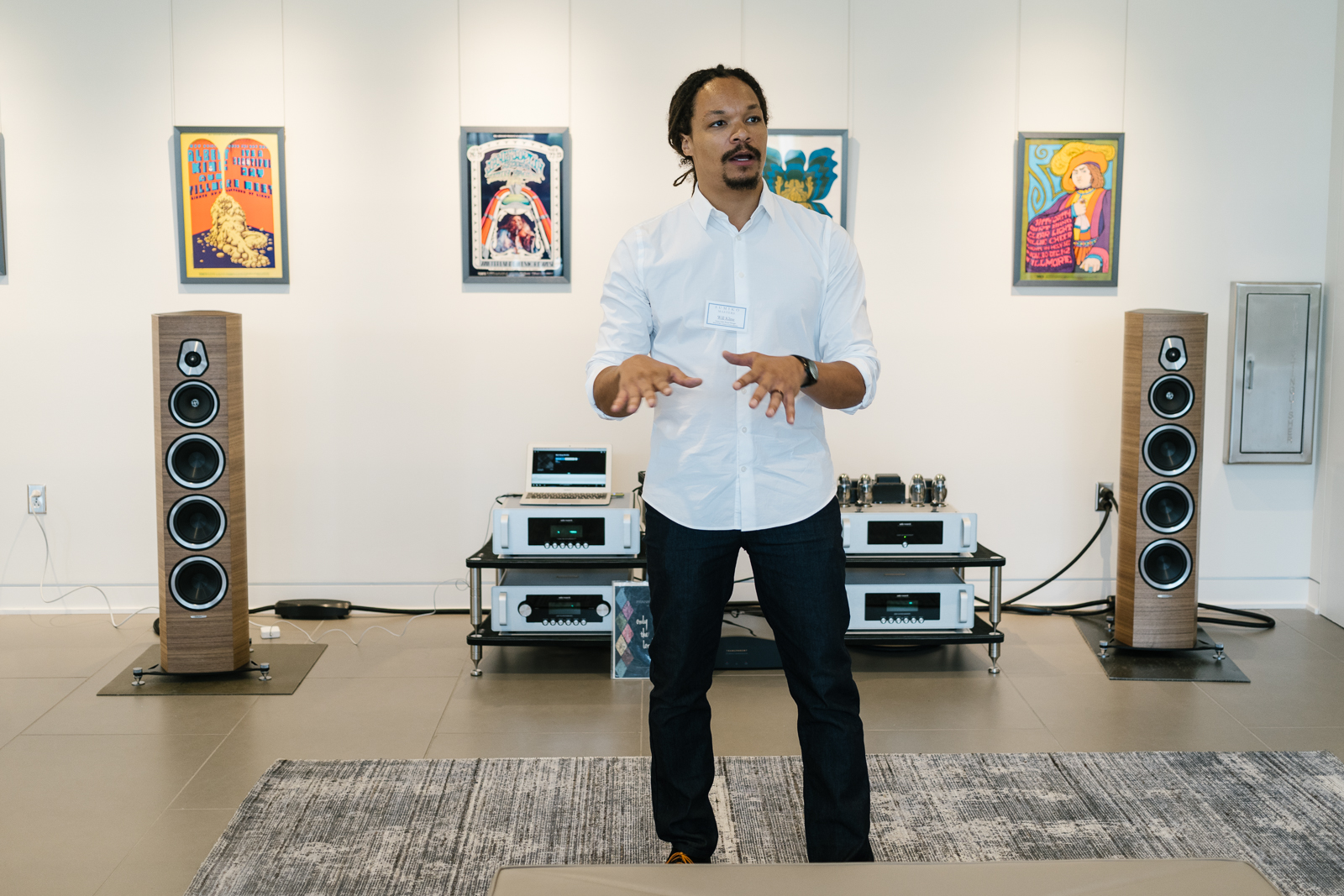 Will grabbed our attention as we finished our lunch and announced to the group that we would get a sneak preview of the Sonetto collection right after we finished lunch. Within minutes we all piled into the room that was previously cordoned off for our first glimpse at Sonus faber’s latest loudspeaker line. Inside the modestly sized room were two systems displaying the Sonetto VIII and Sonetto III and the remainder of the collection (save for the larger center channel) on static display.

After everyone finished ooooing and ahhhing over the beautiful Italian speakers one thing became painfully obvious: there was no music playing. “Hey Will, can we hear them?” someone shouted above the din. Will, with a mischievous look in his eye, glanced around the room and said “You can’t. They aren’t setup yet.” With that a big grin came across his face and it dawned on the rest of us how we would be spending our afternoon. All we had to do was set up some speakers that none of us had ever heard, in a space we weren’t familiar with, all before the press and some high-profile clients arrived to hear and see the speakers for the first time. No pressure. To ratchet the pressure up one more notch, Will setup the Sonetto VIII while we watched in about 8 minutes. So, with that, we split in two groups. One group stayed put and re-set up the floorstanding Sonetto VIII, while the group I was a part of headed back to the Rose Room to try our hand at setting up the Sonetto II shelf/standmount speaker. Actual speaker set up fell to our very own Eric Baines handling the speaker movement, and Julie Mullins (of The Absolute Sound) dictating the movements. It took more than 8 minutes, but Eric and Julie got the Sonetto II sounding quite good.

It was interesting to see two people who, a few hours ago were complete strangers working together toward a common goal. I suppose this is the audio industry equivalent of a “team-building” event. Eric is very familiar with the MASTERS theory of speaker setup as it is one of the cornerstones of how we, at the Sound Environment, setup speakers, but it was a totally new method for Julie. The simplicity of the method was on full display and is part of why it is such an effective tool. Someone who had never practiced this method was able to effectively setup a foreign pair of speakers in an unknown room in under an hour. That’s pretty awesome. 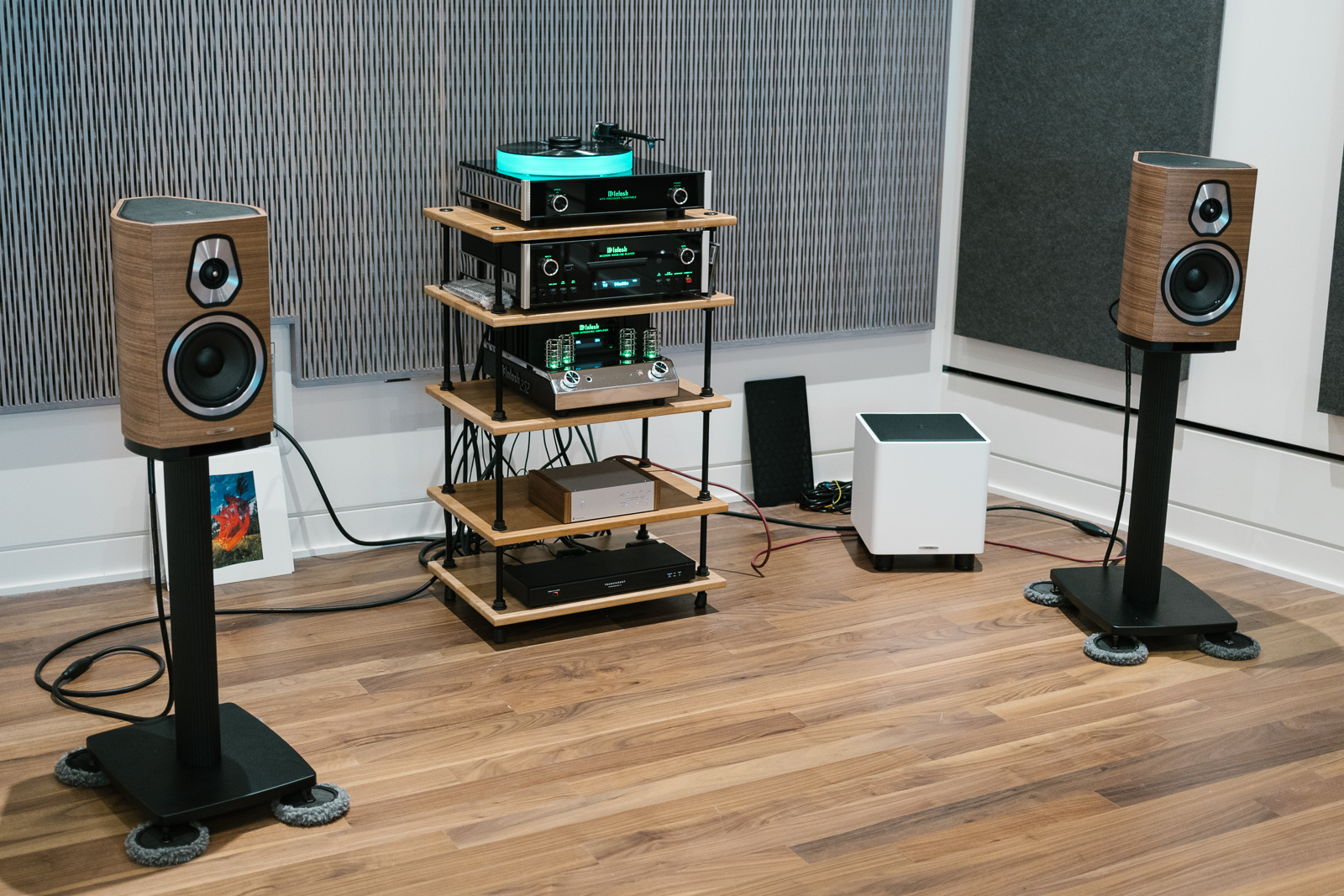 With the Sonetto II setup to a satisfactory degree we began wandering back to the other room to see how work was progressing on the other systems. They were mostly finished as well. Finally, there was music in the room! After a brief stop at the hotel we were back at the 1900 Building for the evening activities: the official launch of the line, a live performance, and dinner. As the wine and hors d’oeuvres began to flow we were officially done “working” and could enjoy the fruits of our labor.

Stepping back, I was finally able to take in just what Sonus faber has accomplished with this new line of speakers. Sonus faber translates to “handmade sound” in Latin, and it isn’t just a marketing gimmick, this is a foundational part of what makes a Sonus faber speaker unique. Each speaker whether it’s the $4,000 Sonetto III or the $130,000 Aida is touched by the same skilled hands in their factory in Arcugnano, Italy. The Sonetto line is focused on bringing that Italian craftsmanship to a more affordable line of speakers, and they’ve truly knocked it out of the park. The speakers are beautiful! I am also happy to report that they sound as good as they look. 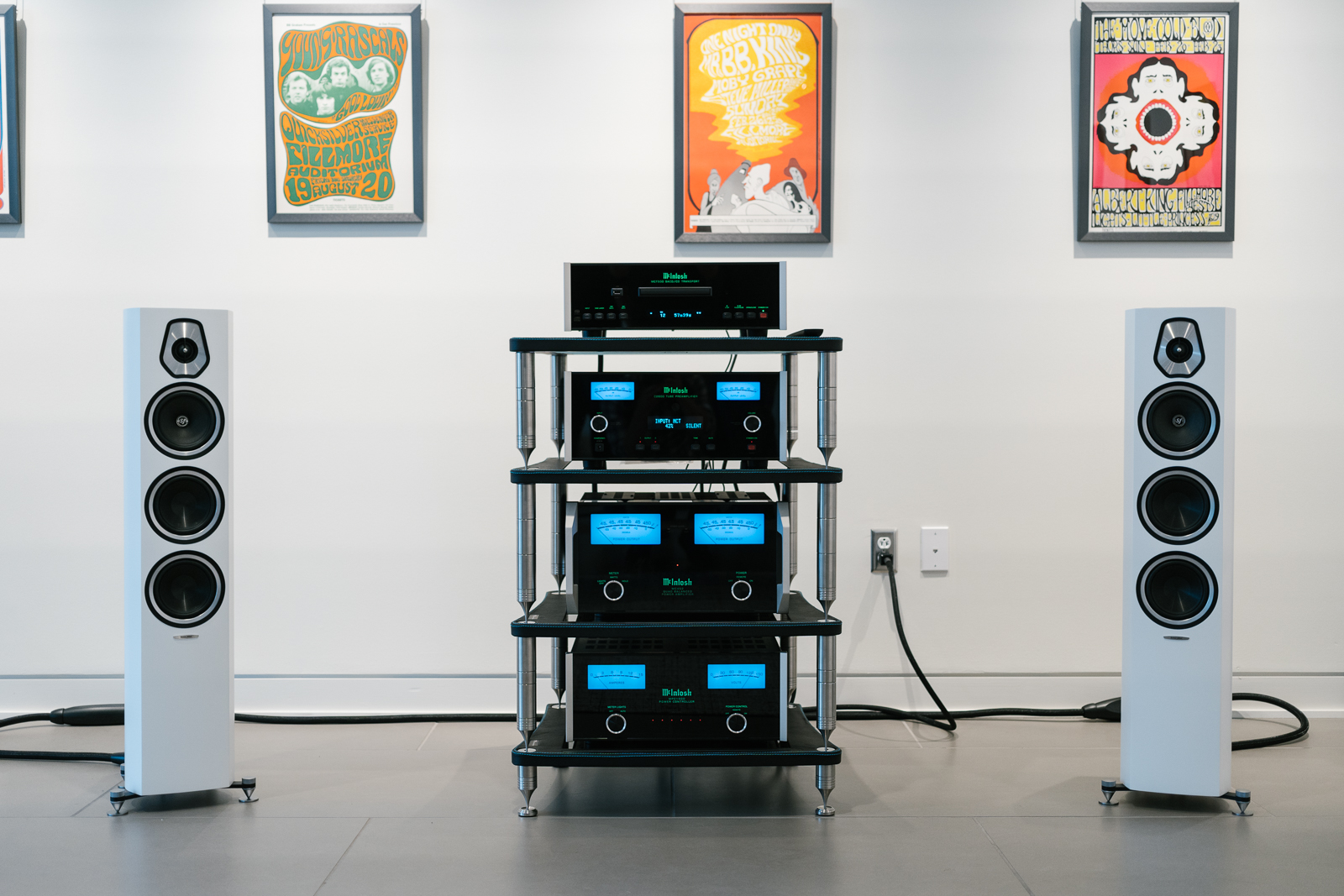 “The Voice of Sonus faber” which is a combination of their proprietary Damped Apex Dome tweeter and paper pulp mid-range driver has trickled down to the Sonetto from their much more expensive brethren. It is a revelation in a speaker at this price. The detail and clarity in this line is typically not heard until you get to speakers in the $10,000 range. The entire line has a similar voice, as you move up to the larger speakers you get better extended bass and the ability to fill a larger space. We are very excited to get some of these speakers in the shop.

I was standing in the back of the room, taking in the Sonetto VIII and Will came up next to me. “So Will,” I said, “did you clean these up at all while we were at the hotel?” “A good teacher never questions his students” he replied. When the teacher is that good I guess there is no reason to. Once we had our fill of wine and snacks we were ushered in to the main performance space of the 1900 Building for the evening’s entertainment. The whole reason the U.S. launch of an Italian made speaker with offices on each coast was happening in Kansas City, Missouri is because of the 1900 Building and its owner, Steven M. Karbank. Steve is an unabashed Sonus faber and McIntosh fan. When it came time to put speakers in the building both for music and for sound augmentation (for live events) he knew it had to be Sonus faber and McIntosh. Everyone told him he was crazy. It wouldn’t work the way he envisioned. It’d be too expensive. It’d be too much work. Yet Steven persisted. The results of his persistence are hard to argue with. 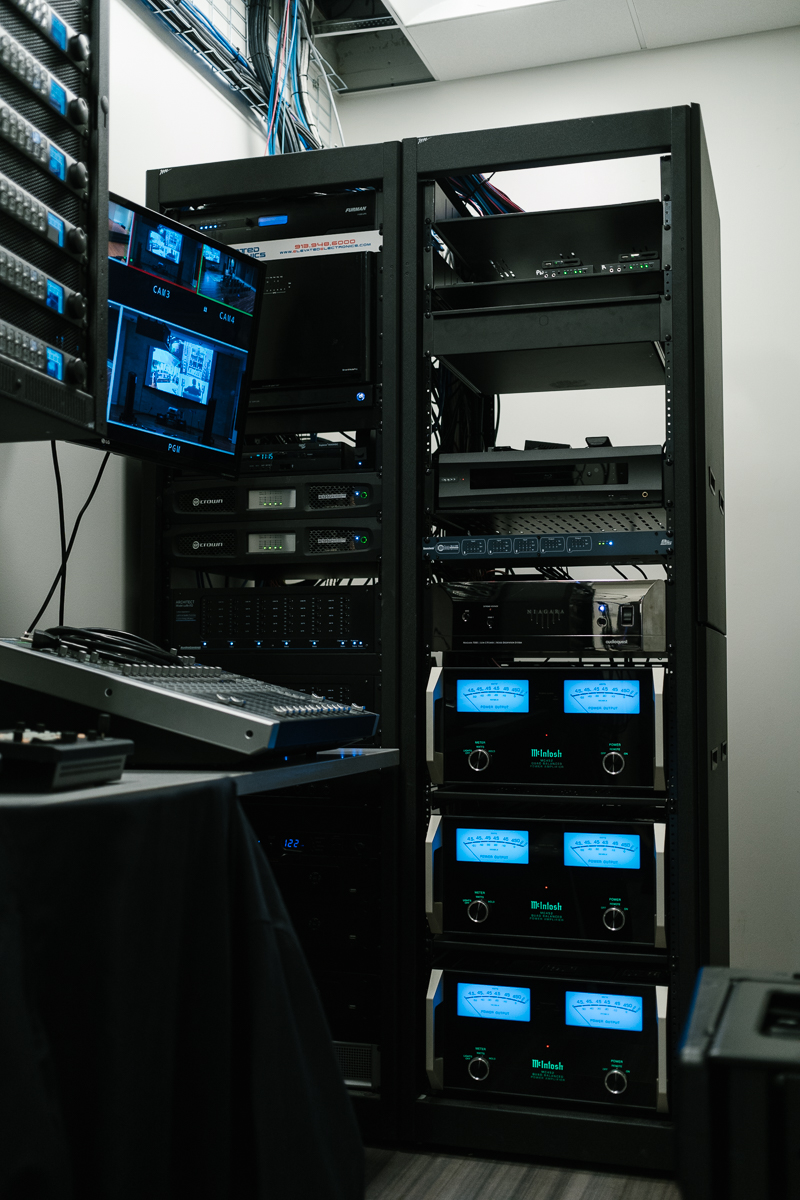 The main performance space has a rather unfortunate beam that runs the length of the room. Everyone involved knew this would be extremely deleterious to the sound in the back half of the room. Rather than install PA style speakers in the room Steven insisted on Sonus faber. He ended up with five Vox Center channel speakers, driven on the back end by McIntosh. Two speakers flanking the stage near the ceiling, and three mounted to the rear of the aforementioned beam. The goal was to have the back half of the room sound just like the front when hearing a live performance, accomplished by very minimally micing the performers and sending the signal through the speakers. 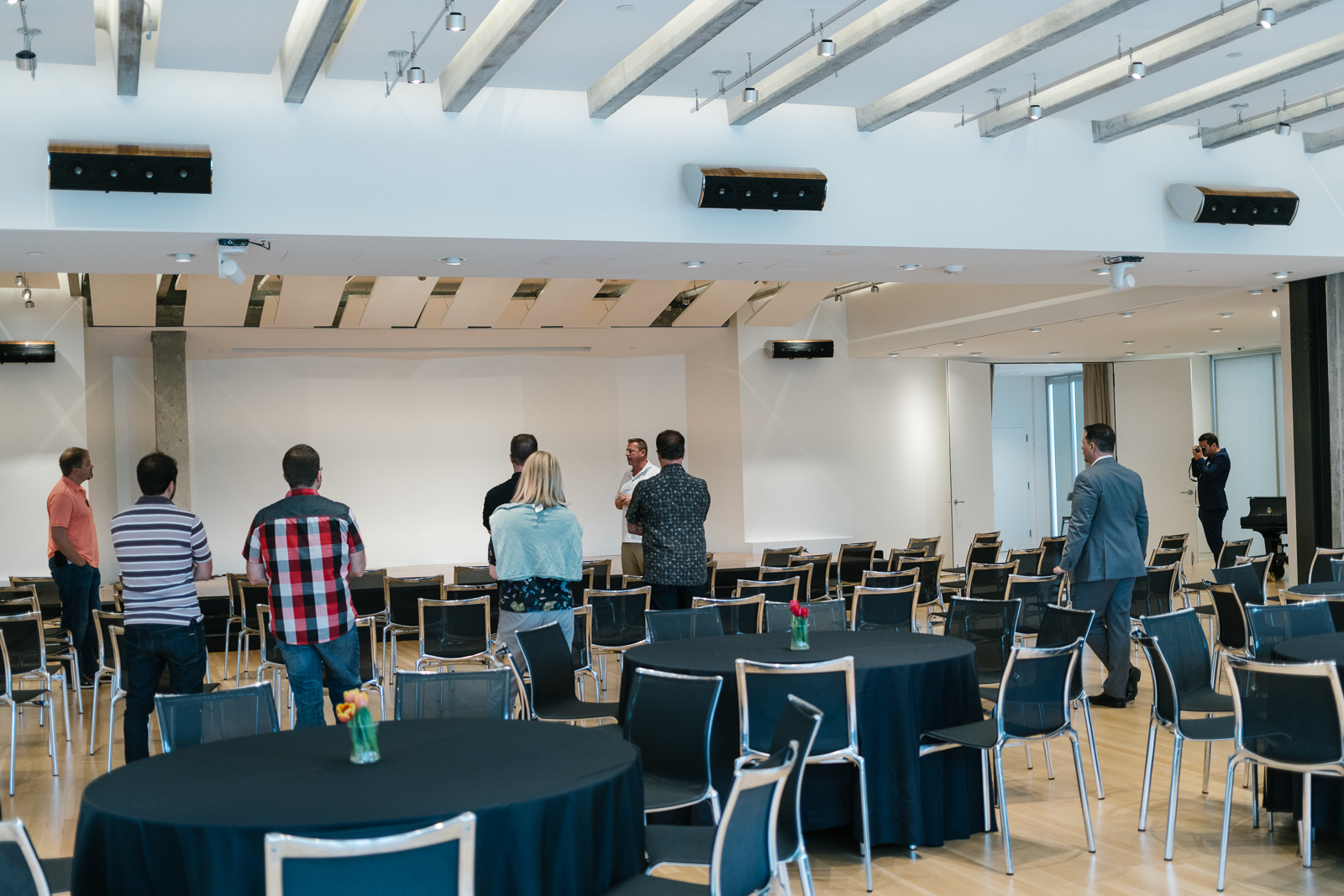 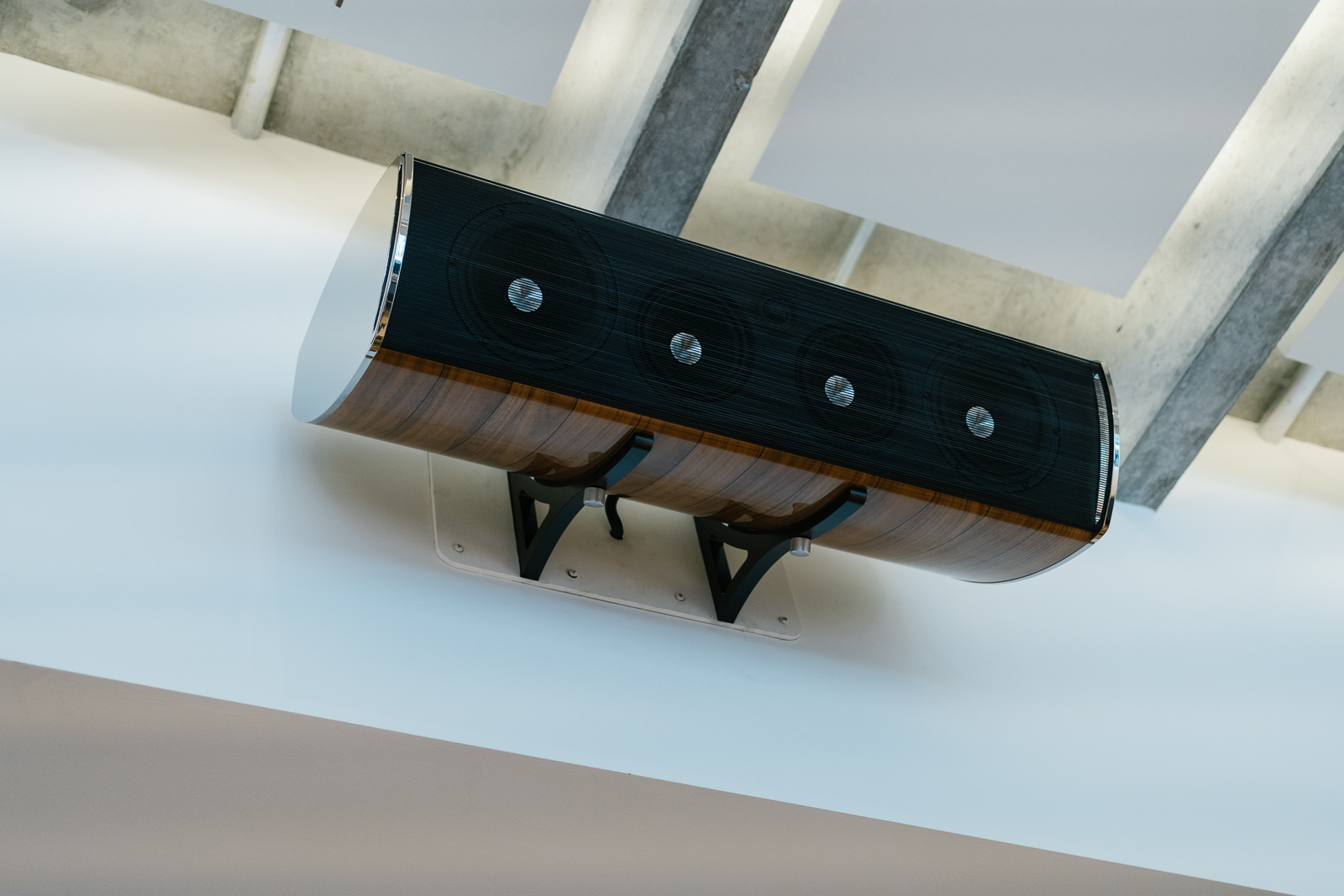 Our evening performance was based around testing this theory. They brought in three musicians from the Kansas City Conservatory of Music, two solo violinists and a solo cello and had them play for us. During this, we were encouraged to get up and move around the room to see if their goal was achieved (don’t worry, the performers were warned that we were going to be moving around).

Although Eric and I both agreed that we could clearly tell the difference between the live music and the sound coming from the speakers we also agreed that the speakers were doing a pretty damn good job. Not to mention that the performers were incredible! KC is clearly home to some very fine musicians.

The evening was capped off by a very nice dinner at the 1900 Building’s restaurant. From what I gather, the restaurant is fairly new to KC’s vibrant food scene and Executive Chef Linda Duerr and her extremely talented team are putting out some of the best food I’ve had the pleasure of eating in Kansas City. It was a fitting way to cap off an extraordinary event. 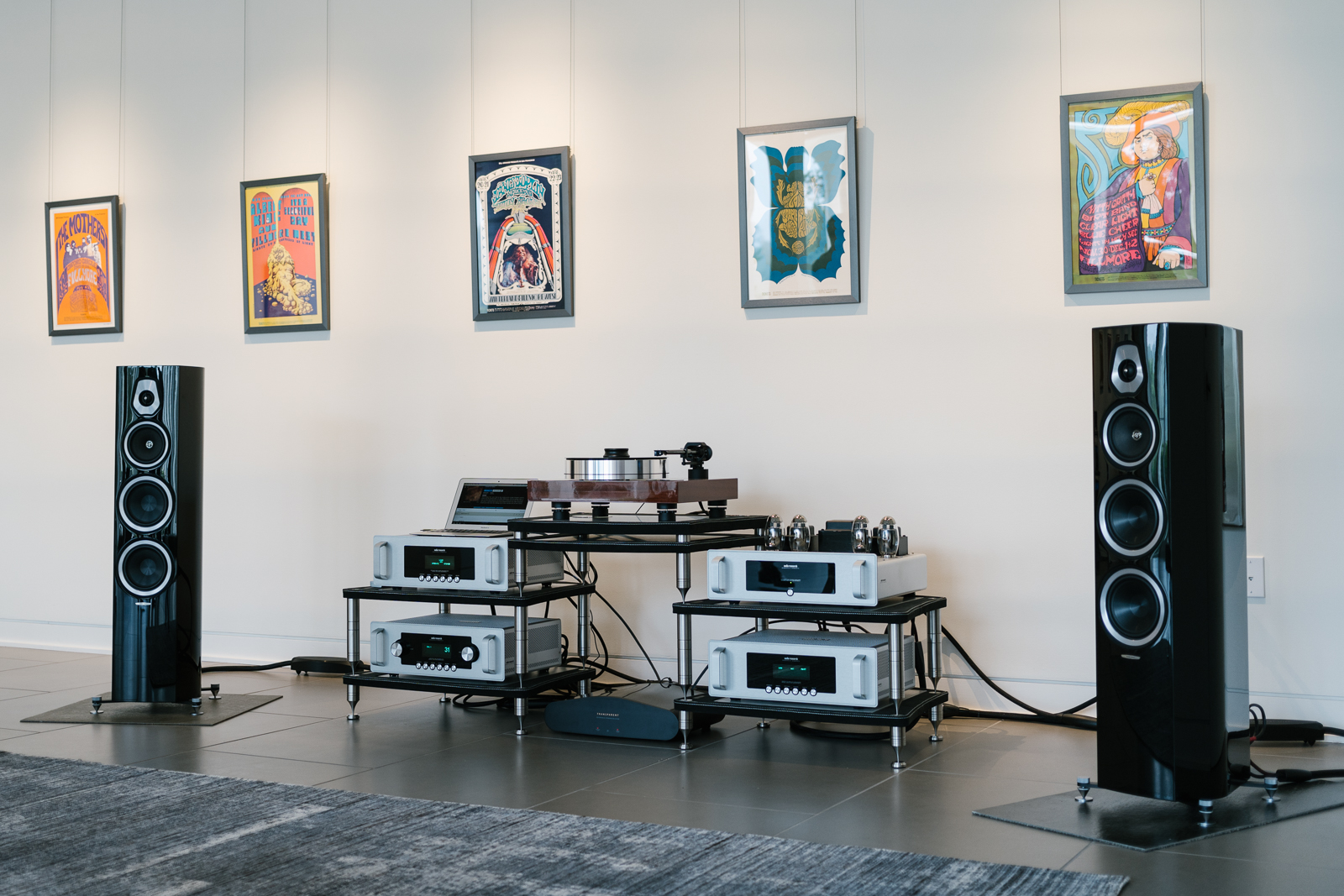 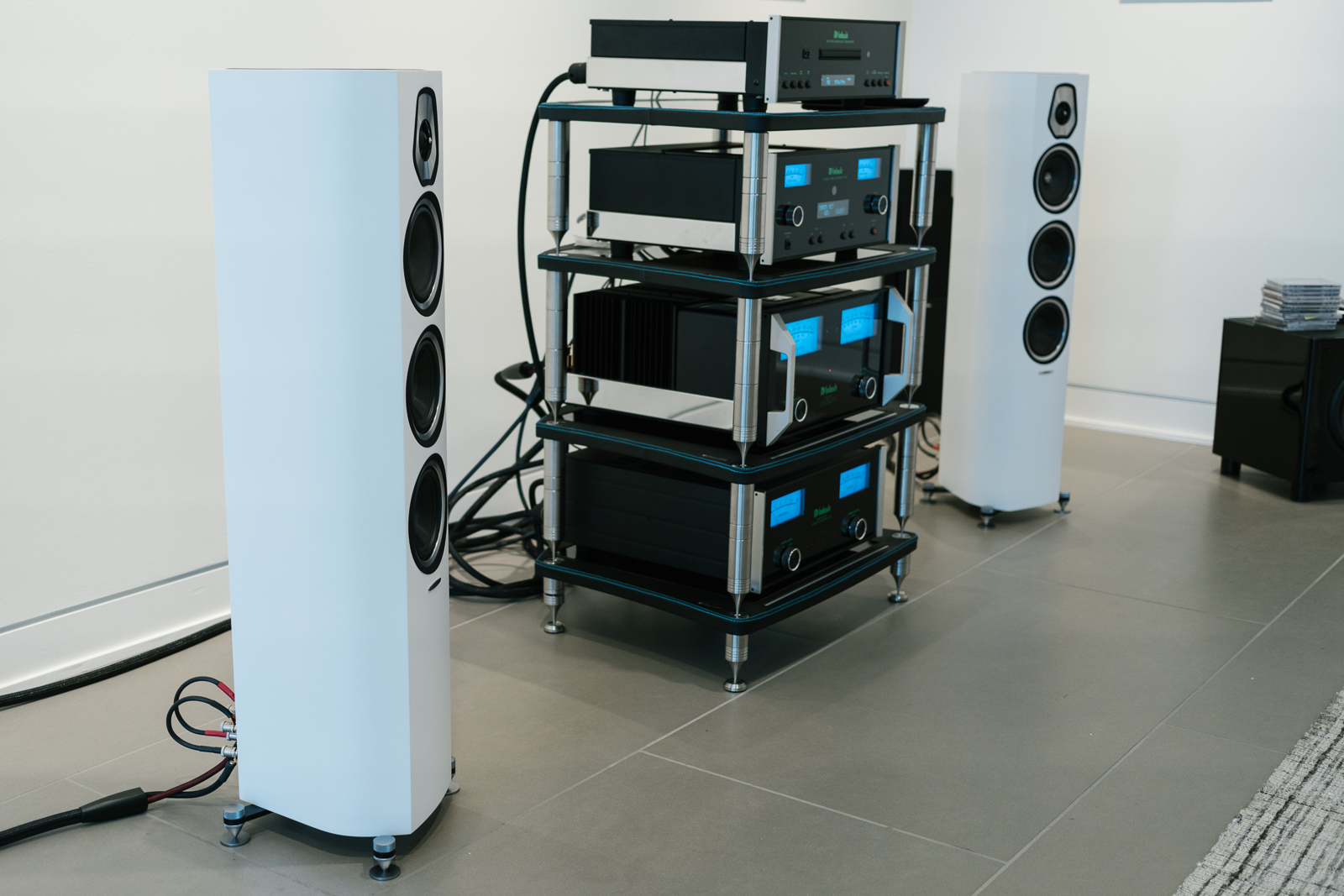 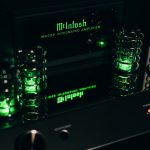 THE NEW SA10 and SA20 from ARCAMNews